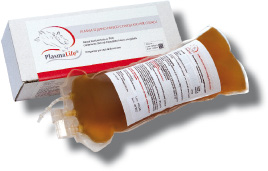 PlasmaLife Horse ® is the only registered horse plasma entirely produced in Italy with permission and registration of the Italian Ministry of Health (AIC No. 104 114 018).

PlasmaLife Horse® will supply foals with hypogammaglobulinemia (IgG < 8 g / l) caused by the failure of (partial or complete) passive transfer of IgG with immediate support for the immune system even after the first 24 hours of life, when oral therapies do not guarantee further survival and the plasma remains the only choice of successful therapy.
Our plasma is obtained from donors who have higher levels of gamma globulin concentrations in the blood compared to normal horses. So each bag of plasmalife contains a minimum quantity of 24 g / l of IgG and 50 g / l of total proteins, but average values are normally much higher.
Our plasma is collected in special transfusion bags of 950 ml and correctly stored so that the plasma can be used immediately after thawing for the transfusion.

Plasmalife Horse® contains no preservatives and is not pasteurized. It is frozen and stored immediately after collection at a temperature of -20 ± 5 ° C. Therefore it must be stored in a freezer at that temperature.
The frozen bags should be handled carefully to avoid damages.
The thawing of Plasmalife Horse® should be made by immersion in a water bath with a maximum water temperature of 37°C.
The temperature of the water during the thawing process must be checked with a thermometer, and if the water cools down too much, it can be heated by adding more warm water, avoiding direct contact with the transfusion bag. It is recommended to remove the bag from the bath during the addition of hot water, and when the water has been restored up to the desired temperature of 37 ° C, immerse the bag again.
This process can be repeated until the plasma is thawed completely. Usually, the liquefied thawed plasma appears transparent, but rarely there may be some fibrin cloths, which do not change the plasma’s quality.
These aggregates are blocked by the specified filter in the set that is absolutely necessary for a secure transfusion. Do not use a microwave to unfreeze the plasma, since they alter the product’s properties. 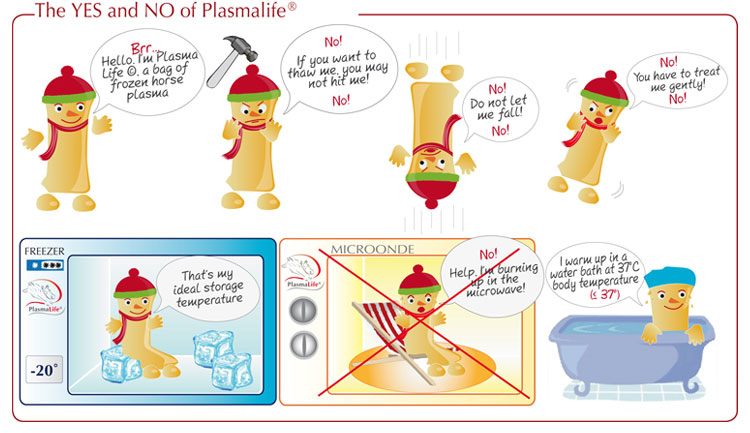 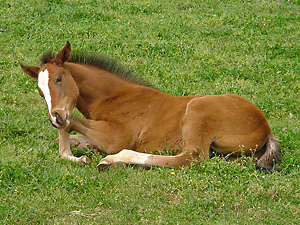 Plasma may only be given intravenously to foals by veterinarians through infusion into the jugular vein of the foal into which a 14G x 2 " catheter has been previously inserted, aseptically, after trichotomy and local anesthesia of the injection site, then using an infusion set with a special filter to retain possible protein aggregates. The recommended dose of plasma is 20 ml per kilo of live weight. One liter can be administered to a foal (45-50 kg) over at least 20 minutes. It is recommended to start the administration slowly (for the first 50-100ml) and to closely monitor the foal. Rare complications are well characterized by symptoms such as:
-tachypnea
-tachycardia
-tremors
-colic
If this occurs, reduce the rate of administration or stop it altogether.
The foal must then undergo a test for the evaluation of serum IgG. If the IgG level has remained below 8 g / l after the first administration, it is advisable to administer a second bag of plasma. The latter should not be administered before 6 hours have passed since the previous transfusion.

On 6 April 2006, Italy adopted the European Directive 2004/28/EC of the European Parliament and the Council of 31 March 2004 amending Directive 2001/82/EC on the Community code relating to veterinary medicinal products and implemented by the publication of Decree Law No. 193 (Article 1) “veterinary medicines are defined as:
– Any substance or combination of substances which are presented as having properties for treating or preventing disease in animals;
– Any substance or combination of substances used in or on the animal body or an animal can be administered to either restore the physiological functions by exerting a pharmacological, immunological or metabolic action, correcting or modifying, or making a medical diagnosis

To this aim, active ingredients are considered any matter irrespective of its origin, namely:
– Human origins, like the blood and its derivatives
– Animal origin, such as micro-organisms, whole animals, parts of organs, animal secretions, toxins, extracts, blood products

Horse plasma is therefore a veterinary drug and shall be subjected to all the regulations and controls according to veterinary medicine.

“No medicinal product under this Regulation or the European Directive 2004/28/EC may circulate without permission of Health Ministry”(Legislative Decree n.193 April 6, 2006, Article 5).

PlasmaLife Horse® received the approval for the sale of horse plasma by the Health Ministry with the number 104114018 dated 12 January 2011 (with publication in the Official Gazette of the Italian Republic dated 02/09/2011).

The company “PlasmaLife s.r.l.” has received the “approval for the production” and the certification of compliance with the rules of Good Manufacturing Pratice(GMP) by the Ministry of Health.

Pharmacovigilance is the control mechanism by which veterinarians, pharmacists, health authorities, pharmaceutical companies and the Ministry of Health use with the aim to assess, with continuous and systematic monitoring , the safety of a finished product for animals and discover its adverse reactions, and also to understand and take any appropriate action to reduce any possible risk.

Who has reason to believe that the use of a veterinary drug has suspicious side-effects, must report back to the regional center of pharmacovigilance …and to the Ministry of Health which will bring out without new or with even higher cost to the state budget, all the necessary measures avoiding other risks.” (Legislative Decree n.193 April 6, 2006, art.91)

It is therefore a moral and institutional obligation to report adverse reactions and side effects of administration of veterinary medicinal products to the competent authorities.

For more information on Pharmacovigilance, we urge you to read the reporting of suspected side effects, to visit the Ministry of Health at www.salute.gov.it

To report a suspected adverse reaction after the administration of PlasmaLife Horse®, the following telephone number is available 24 hours a day: +39 335 8448532